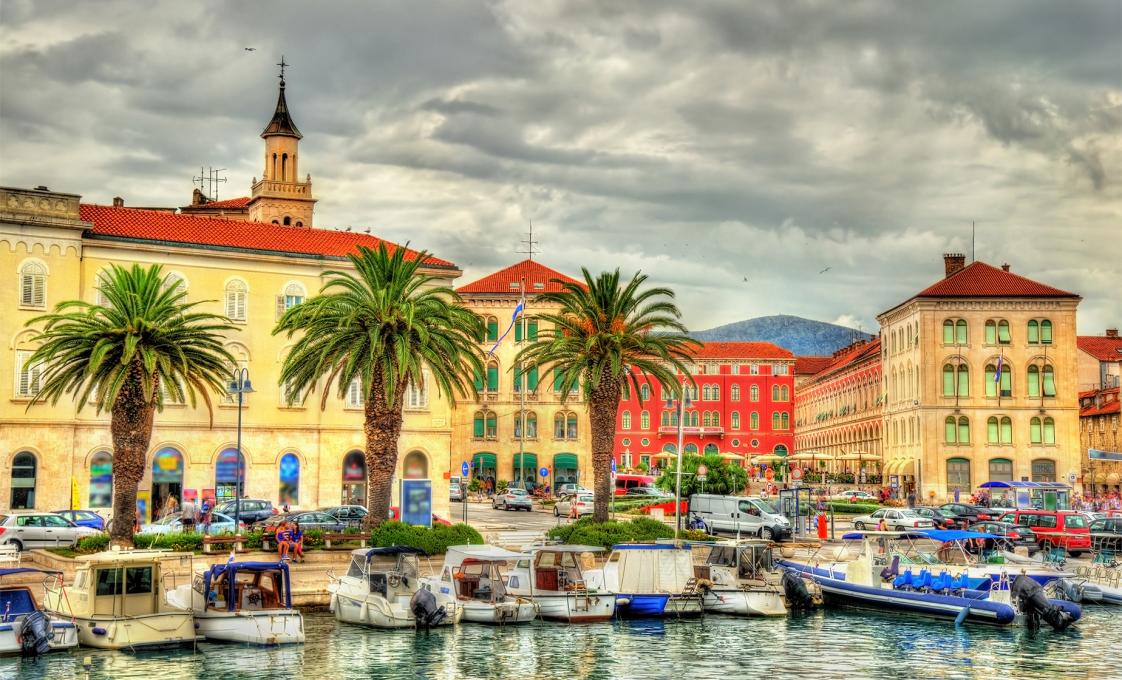 Enjoy a comfortable ride through the sights of Split via an open-top bus before exploring the Diocletian Palace on a fascinating walking tour of the ancient city.

Explore the fascinating city of Split with two tours in one. Begin your trip with a open-top bus tour that enables you to see the unique terrain and culture of modern Split. Thereafter, step out and explore the Diocletian Palace and the heart of the city on a fascinating walking tour.

Split is the second largest city in Croatia and one of the oldest cities on the Adriatic Sea. Your English speaking guide will provide you with interesting facts about Diocletian's amazing culture. Beginning at the city center promenade, your open-top sightseeing bus will take you along the scenic Bacvice Beach, where the panoramic views will take your breath away.

Thereafter, you'll see the sports facilities, designed for the Mediterranean Games, and world class museums featuring unique cultural and historical artifacts. These include the Maritime Museum, the Archaeological Museum dedicated to preserving cultural artifacts of the Croats from the Middle Ages, and the Mestrovic Gallery, an art museum displaying artworks from the 20th-century sculptor, Ivan Mestrovic.

After driving through the city and scenic seascapes, the approximately 45 minute bus tour ends where it began, in the city center promenade. Then, it's time to immerse yourself in the history and culture of this enchanting city. You'll walk along the ancient cobblestone streets and historical architectural structures making up the Diocletian Palace.

Tour this world renowned palace, which was built by the Roman emperor Diocletian in the 4th century AD. Known worldwide as the most complete remains of a Roman palace, it is part luxury palace and part military fortress. The palace is a city unto itself, with numerous points of interest for you to discover. Because of its important significance to the Mediterranean region, UNESCO deemed it a World Heritage Monument.

See the Bronze Gates at the southern part of the palace, Diocletian's cellars, the monumental Peristyle court, and the Vestibule of the Emperor's Palace. Explore Diocletian's Mausoleum, which forms the main part of St. Dujam's Cathedral, and view the cathedral treasury containing relics of Saint Dujam's. Make your way to the Temple of Jupiter, an ancient Roman temple that was later converted to Saint John's Baptistery, the Silver Gates, and the City Museum housed within the Papalic Palace. View the Golden Gates, St. Martin's Church, and the Chapel of Arnir the Blessed.

Further stops on the tour include the Piaca (People's Square), the town hall, the Karepic house, the Iron Gates, the Chapel of Our Lady of Belfry, the Fruit Square, the Venetian castle, the Milesi Palace, and the Monument of Marko Marulic.

Book this comprehensive tour where you'll learn many interesting facts about Diocletian and create long-lasting memories.

Michael Bonner
Mr. Bonner has over a decade of experience working in the cruise industry in a variety of roles for both Royal Caribbean Cruises Ltd. and Viking River Cruises. Most recently, Mr. Bonner was the Chief Operating Officer for The Scholar Ship, a Royal Caribbean program aimed at providing college students onboard educational programs in conjunction with enriching shore excursions around the world. Mr. Bonner also helped co-manage Viking River Cruises U.S. Operations, and he ran the corporate, strategic, and deployment planning functions at Royal Caribbean. While at Royal Caribbean, Mr. Bonner was responsible for forming Royal Celebrity Tours, Royal Caribbean's land-based tour operation in Alaska, which takes cruise passengers on multiple day tours through the interior of Alaska either before or after their cruises. Prior to working at Royal Caribbean, Mr. Bonner was a consultant for Booz Allen & Hamilton.
Less
from $34.00 (USD)
Per Person
Contact Us
Tour Type
Group
Group Size
Standard
Activity Type(s)
Cultural, Scenic
Tour Duration
2 Hours
Activity Level
Moderate
Tour Leaves From
Cruise Ship Pier
Food/Beverage Provided
Not Included
Special Instructions
We recommend wearing comfortable seasonal clothing, walking shoes, a hat, sunglasses, and warm clothing on windy days.
Restrictions
Guests must be able to walk a little more than half a mile over varying terrain and steps.
Terms & Disclaimers