The Land Of Frozen Fire 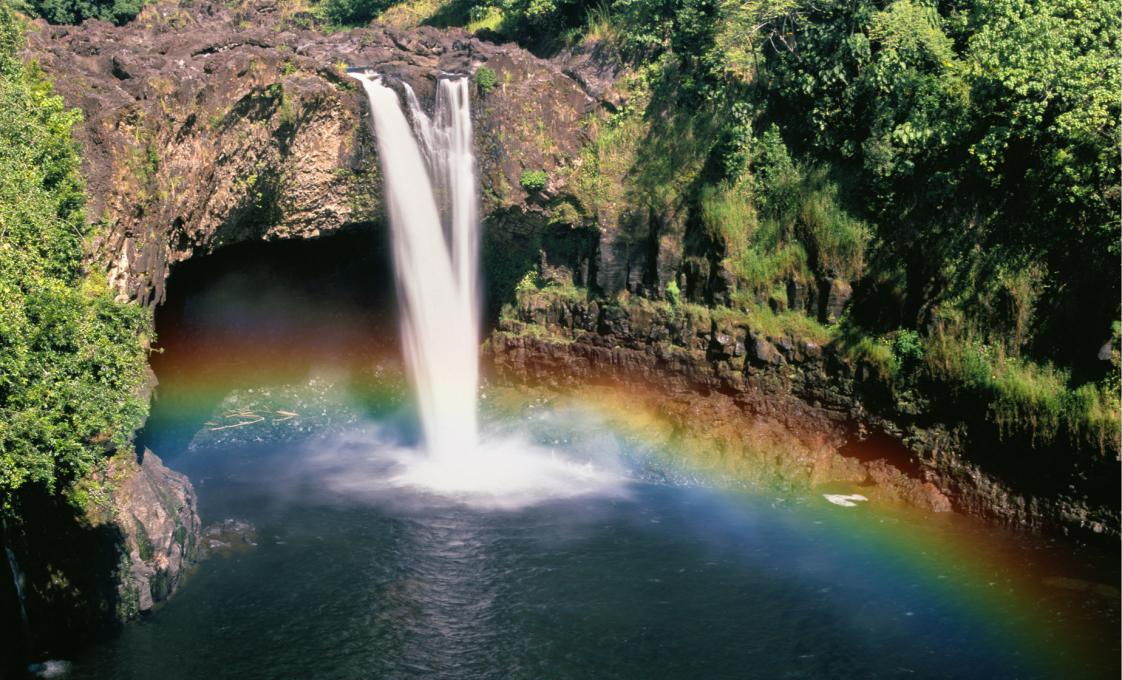 Journey to the land of frozen fire and experience Liliuokalani Gardens, Rainbow Falls, Kaumana Caves, Lava Tree Park and the newest black sand beach plus so much more on this small group adventure while in Hilo.

The Land of Frozen Fire

Take full advantage of your time while on the beautiful island of Hilo and prepare to explore Hawaii's back roads among the volcanic eastern rift zone and journey to the land of frozen fire! Travel in a small group of no more than fourteen guests at a time, making for a very personal and intimate tour opposed to the large and overcrowded large bus options.

Your adventure starts with a scenic drive through the historical downtown Hilo area as you learn about the devastating tsunamis of the past. Make a stop at one of the best and well-known waterfalls on the Big Island, Rainbow Falls. The waters of this 80ft. waterfall cascade beautifully over a lava cave where picturesque photo opportunities abound so have your cameras ready and cell phones fully charged for Insta-worthy snaps.

Up next, time to explore lava caves! Walk down into a lava cave through a skylight, also locally known as a lava tube. Kaumana Caves was created by one of the island's largest volcanoes, Mauna Loa. Your local, expert guide will explain how molten lava makes these spectacular lava tubes and the fascinating colors inside.

Continue from here into the Hawaiian countryside of the Nanawali Rainforest and the area of recent destruction from the 2018 Kilauea volcanic eruption. Several earthquakes cracked open the roads, lava fountains started spewing lava 300ft. into the sky and nearly 2,000 residents were evacuated. This amazing force evaporated Green Lake, the largest, natural freshwater lake in Hawaii. You will be shown the areas of mass destruction from the Kilauea Volcano.

Along the drive, you will arrive at the quaint town called Pahoa. Once a booming plantation town and now a laid-back hippie town with old school artistry charm and wood-plank boardwalks. See the current lava flow that nearly wiped this town off the map. Next, walk a trail among lava trees that looks something like a petrified forest and look down into a deep fissure. This unusual volcanic sight is one stop not to be missed on the island.

The next stop is a truly amazing creation by Kilauea's lava flow. View the newest created black sand beach where once was an old boat harbor and ramp that you can still see and has now been cut off from the creation of a large black sand beach.

After a full day of an incredible journey experiencing mother nature and her wonders, it's time to return to the port area as you enjoy the panoramic sights along the entire way and reminisce about your unforgettable day spent while in Hawaii.

Michael Bonner
Mr. Bonner has over a decade of experience working in the cruise industry in a variety of roles for both Royal Caribbean Cruises Ltd. and Viking River Cruises. Most recently, Mr. Bonner was the Chief Operating Officer for The Scholar Ship, a Royal Caribbean program aimed at providing college students onboard educational programs in conjunction with enriching shore excursions around the world. Mr. Bonner also helped co-manage Viking River Cruises U.S. Operations, and he ran the corporate, strategic, and deployment planning functions at Royal Caribbean. While at Royal Caribbean, Mr. Bonner was responsible for forming Royal Celebrity Tours, Royal Caribbean's land-based tour operation in Alaska, which takes cruise passengers on multiple day tours through the interior of Alaska either before or after their cruises. Prior to working at Royal Caribbean, Mr. Bonner was a consultant for Booz Allen & Hamilton.
Less
from $155.00 (USD)
Per Person
Contact Us
Tour Type
Group
Group Size
Small
Activity Type(s)
Cultural, Active, Scenic
Tour Duration
6 Hours
Activity Level
Moderate
Tour Leaves From
Cruise Ship Pier
Food/Beverage Provided
Snacks, Beverages
Special Instructions
We recommend wearing comfortable, weather appropriate clothing and closed-toe walking shoes. Sunscreen, sunglasses and hat are also suggested.
Restrictions
Guests must be able to get in and out of transportation. Guests must be able to walk on uneven terrain and there are stairs descending into the lava tube that are slightly steep. Not recommended for guests with physical limitations, any mobility issues nor for children under the age of 5 years. Not recommended for women that are pregnant. This tour is not wheelchair accessible.
Terms & Disclaimers